You are here: Home / Information / About Garnets

Garnet, the January birthstone, is derived from the Latin word granatus, meaning grain like. Garnet crystals can also look very similar to pomegranate seeds. Garnet is a combination of minerals with similar physicochemical properties. Garnets have a variety of names based on the particular color of the crystal. Most people think garnet gems only come in red; this is a fallacy. These exquisite crystals come in all colors

Some garnet crystals include:

A few garnet crystals can also exhibit different colors when viewed in different lights. But the color variety is just a tiny part of the gem. It is a member of an extended variety of stones that are natural, sparkling and very reasonably priced. In fact, garnets are frequently used by fashion designers to make beautiful jewellery pieces.

All species of garnets are used as gemstones. The use of garnets as gemstones has a long rich history. It is claimed that Noah steered the Ark through darkness using the light from garnet crystals. The Egyptians often crowned the pharaohs with beautiful bracelets and necklaces adorned with garnet. The ancient Chinese rulers used garnets to decorate military uniforms.

Garnets also have been associated with having mystical and healing properties. Some individuals wear garnets to relieve arthritic pain, combat depression and maintain good health. Others believe that the garnet can arouse passion, increase libido and promotes energy.

The use of garnets as contemporary piece of jewellery did not start until the 19th century. The color change garnets are usually imported from Madagascar, Russia, Tanzania, Sri Lanka, India, Canada, USA, Thailand, Spain and the Czech Republic. In most cases, one color is dominant and the others not so. To appreciate the color changes, always examine the garnet in different light settings. The story about garnets would not be complete without highlighting the two most beautiful garnets-umbalite and tsavorite. Both are intensely brilliant.

From the central plains of East Africa, near the mountains of Kilimanjaro is another classic garnet, the Tsavorite. This brilliant green grossularite gem, like demantoid is in high demand and not always available in sizes above 1-2 carats. 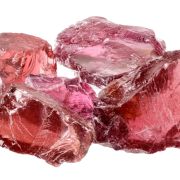 Garnets come in many cuts and shapes. While red garnet used to be the only known garnet, tsavorite is now considered to be the most valuable garnet. Garnets are durable minerals and easy to look after. Garnets which appear in different colors are rare and high sought after. Some of these pricey garnets can cost anywhere from $4,000-$6,000/carat. Pink Garnet is the highest of fashion at present

Unfortunately the gem industry also is heavily infiltrated with fakes and synthetic gems; so to avoid any disappointments always buy from a reputable dealer.

Our Company Gem Hunters only sell natural and genuine faceted gemstones and gemstone rough. We specialize in untreated gems

Garnets are fast becoming the most sought after gems on the market today.

Such a wide array of colors, now including Blue Garnet.