You are here: Home / Information / The Garnet Family 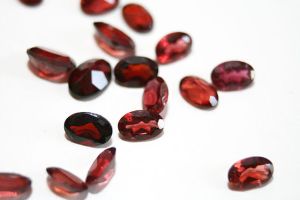 The Pyrope and Almandine garnet is your everyday red garnet that you will see everywhere. It is found in many countries and is a low cost affordable garnet often a lovely dark red. Pyrope garnet has plenty more of the mineral called magnesium than almandine, but the Almandine has more iron content.  Pyrope and Almandine are often grouped together as one. Almandine can even be mixed into the wonderful red garnet Rhodolite, but I will describe that one below. The Tsavorite garnet is a very bright grass green. Tsavorite is very expensive and very beautiful but mostly formed in quite small sizes. Not found in many places, making it a bit rare. It can be found around Pakistan, but mostly it is always found near Kenya and Tanzania in Africa. A lot of nice ones are found very close to the Tsavo National park so you can see where it gets its name from. Not many people know of this beautiful bright green gem, but the collectors and gem enthusiasts sure do.

Tsavorite is a variety of the garnet group species called grossular, a calcium-aluminium garnet. Trace amounts of vanadium or chromium provide the green color. The Hessonite garnet isn’t well known, it is often a yellow brown red colour with variances of these colours.

The Spessartine Garnet is a bit more orange, ranging from orange/red or orange/pink. Quite often the spessartine isn’t perfectly clear.  The good bright orange ones we call the colour Fanta or Mandarin for obvious reasons.

If spessartine is mixed with pyrobe you get a rare pretty gem called Mallaiai or  Mallaya   garnets  which has many varieties of spelling. The grossular garnet is greenish, but they can often be yellow or yellowy green in colour. The grossular though can also have other more rare colours that are not often seen. For example  it can be transparent, greenish blue and a pinky yellow odd mix of colour. Uvarovite is a rare, calcium-chromium emerald-green variety of the grossular garnet. The Andradite Garnet’s are lovely as specimen crystals. Andradite’s are mostly opaque but can be nice, bright and clear. They can have different style of crystal growth patterns and shapes. It can be quite black called melanite or green called demantoid or a rare yellow opaque called topazolite.